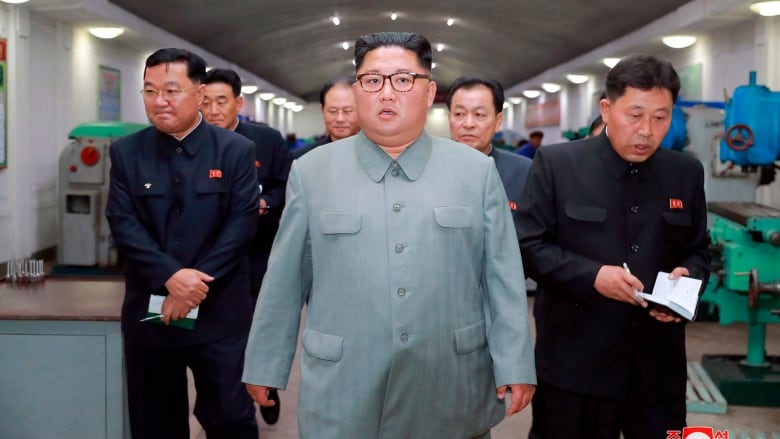 The announcement was made following a meeting between Defence Minister Harjit Sajjan and his Japanese counterpart, Takeshi Iwaya, in Tokyo.

The deployments — known as Operation Neon — will involve a rotation of frigates, maritime patrol aircraft and possibly submarines.

The department announced in a statement that HMCS Regina and the replenishment ship MV Asterix will be the first assets deployed.

Both vessels participated recently in security and counter-terrorism patrols in waters off the Middle East and East Africa, known as Combined Task Force 150.

The missions off North Korea will take place periodically over two years and will be aimed at supporting sanctions intended to force the regime in Pyongyang to give up its nuclear weapons program.

"These sanctions play a key role in supporting global security and prosperity in the region," Sajjan said in a statement.

Following their meeting on Monday, the two ministers also laid down more details on how Canada and Japan will co-operate more closely on defence matters.

The two countries will, among other things, work together to improve peacekeeping and engage in regular navy and air force exchanges.

Canadian warships have participated in sanctions enforcement off North Korea in the past. Last year, the navy deployed the submarine HMCS Chicoutimi, while the air force sent a CP-140 Maritime patrol plane.

The surveillance aircraft was buzzed by Chinese fighters while it monitored the sea lanes for cargo ships and tankers intent on violating embargoes imposed on North Korea by the UN Security Council.

Japan has been trying to encourage Canada to become more active in the region because of tensions with the erratic regime of Kim Jong-un and the rising military influence of China throughout the Asia-Pacific.

Military activity was, along with trade, among the key topics of the discussions between Trudeau and Abe.

In a joint statement, Sajjan and Iwaya reaffirmed both countries' commitment to a de-nuclearized North Korea and to halting "ship-to-ship transfers" of illicit goods.

Late last year, U.S. media reports quoted senior Pentagon officials saying the patrols by international allies have forced North Korea to switch tactics in order to evade the dragnet. Ships have been transferring shipments of sanction-busting products, such as oil, further out to sea.

The ministers also expressed "serious concerns regarding the situation in the East and South China Seas, and strongly opposed unilateral actions that could escalate tensions and could undermine regional stability and the rules based maritime order, in the militarization of disputed features in the South China Sea."

Those words take direct aim at China, which has been locked in a dispute with its neighbours over artificial islands the Chinese have built and fortified in the South China Sea. They also refer to an ongoing dispute between China and Japan over ownership of eight uninhabited islands in the East China Sea, which are known as the Diaoyu Islands in China and as the Senkaku islands in Japan.

Murray Brewster is senior defence writer for CBC News, based in Ottawa. He has covered the Canadian military and foreign policy from Parliament Hill for over a decade. Among other assignments, he spent a total of 15 months on the ground covering the Afghan war for The Canadian Press. Prior to that, he covered defence issues and politics for CP in Nova Scotia for 11 years and was bureau chief for Standard Broadcast News in Ottawa.