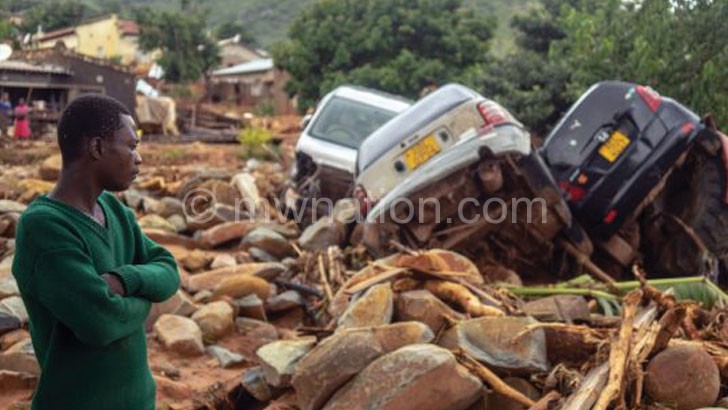 Three southern African nations of Malawi, Mozambique and Zimbabwe continue to grapple with recovery efforts following devastation caused by tropical cyclone Idai described as the worst to hit the region.

For Malawi, the cyclone came on the back of earlier flooding caused by week-long incessant rains, mostly in parts of the Central and Southern regions. President Peter Mutharika declared a State of National Disaster following the disaster that hit hard 17 of the country’s 28 districts.

Malawi’s neighbour, Mozambique, was not spared either the impact of the incessant rains and later the cyclone, forcing 1 500 households to flock to Malawi to seek shelter and other relief assistance.

In an interview yesterday, Nsanje district commissioner Reinghard Chavula said: “We are in talks with the office of the DC for Mutarara [district in Mozambique] and he promised to take action.

“Of the 1500 families, some are seeking shelter in already designated camps while some are being accommodated by their relatives and friends in our villages.”

She said her office to date has not received any report of displaced Malawians seeking shelter across the border.

Commenting on the development, Department of Disaster Management Affairs (Dodma) director of response and recovery Harry Kachale said his office has engaged the Mozambican Government to work together in assisting Mozambicans seeking shelter in Malawi.

Overall, he said more relief assistance, particularly food and shelter, is needed for the affected people.

But Kachale commended the international community and non-governmental organisations (NGOs)—both local and international—for responding positively to the appeal for assistance.

He said: “Dodma is overwhelmed by the support that is coming in. The assistance, both in cash and kind, will help alleviate some of the challenges faced by the displaced people.”

In the meantime, Kachale said his office is taking stock of the number of people reached out with assistance and those still in need. He said a status report would be issued in the next three days.

He said: “A reasonable number of people have been reached in Nsanje and Chikwawa.

“Where roads are still impassable, we are using helicopters to reach the people.

“However, more assistance needs to be channelled to other affected districts of Mangochi, Machinga, Zomba, Phalombe, Mulanje, Mwanza and Neno.”

Kachale also commended the South African rescue team that arrived in the country on March 13 for providing medical assistance to the victims in hard-to-reach camps using their helicopter.

In solidarity with the three southern African countries, the African Union (AU) has pledged to assist Malawi and Zimbabwe with $100 000 (about K73 million) each while Mozambique will get $150 000 (about K109 million).

AU Commission chairperson Moussa Faki Mahamat told Malawi’s Ambassador to the AU and Ethiopia, Chimango Chirwa, on Tuesday that the continental grouping’s support was in response to efforts by the governments of the affected countries and the Southern African Development Community (Sadc) secretariat.

The AU estimates that two million people have been affected in the three countries, with thousands displaced, vast crop fields destroyed, communications infrastructure and roads impassable, making it difficult for recovery efforts.

On Tuesday, Tanzania announced a dispatch of 200 metric tonnes (MT) of food stuff and medical supplies to the three countries.

Tanzania’s Minister of Foreign Affairs and East African Cooperation Palamagamba Kabudi is quoted in the media as having said the assistance includes 24MT of drugs and medical supplies with each of the three countries getting eight MT.

Said the minister: “Seven lorries carrying a maize consignment from Mbeya region are already destined for Malawi while Mozambique and Zimbabwe will receive seven tonnes of rice each.”

In an update for the period March 10 to 16, Dodma estimates that 56 people have died with 840 000 others affected by the floods. Close to 94 000 people are displaced and sought shelter in camps. On the other hand, 577 were injured.

The Dodma report indicates that government would support 130 000 households and has since received $1.7 million for initial response against a total request of $11.86 million.

Response is ongoing with provision of food, non-food items and water treatment chemicals in affected communities.

In addition, 46 000 mosquito nets will be distributed in the most affected areas after Britain’s Department for International Development (DfID) provided $400 000 (about K293 million) to NGO partners.

Other NGOs such as Red Cross are expected to fund assessment, logistics and non-food items.

Several NGOs and companies are also supporting the cause through the Disaster Relief Emergency Fund.

Transportation of goods and personnel continues to be a challenge, especially in Traditional Authority (T/A) Mlolo in Nsanje District which remains inaccessible.

The UN agencies said Malawi Defence Force is assisting in delivery of foodstuffs using helicopters while Unicef and WFP provided boats for movement to locations on the eastern side of Shire River.

The UN update added: “WFP has two helicopters on stand-by stationed in Entebbe [in Uganda]. Funding is required to deploy them to Malawi.”

The UN has since expressed concern that the continued rains in some parts of Malawi, Mozambique and Zimbabwe will undermine efforts to reach the people who have been affected by cyclone Idai.