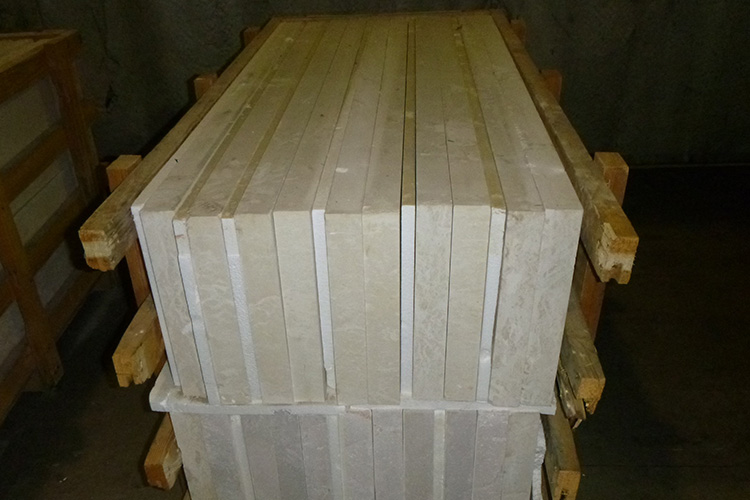 The drugs were hidden between stacks of marbles.

Gulf Today, Staff Reporter
The Australian authorities succeeds in seizing about two tons of the "methamphetamine" drugs inside shipping containers in a Sydney port, in cooperation with Dubai Customs, which is the largest drug seizure in Australia since 2019.
Sultan Ahmed Bin Sulayem, Chairman of the Ports, Customs and Free Zone Corporation, said: “We are working to achieve integration in our efforts to protect society from risks and facilitate trade movement not only at the local level but also at the global level, in cooperation with the security authorities in the relevant entities to present an international unique model that distinguishes Dubai on the world map”.
Bin Sulayem explained that the success of this operation came as a result of the support and directives of the top leadership to work on developing deep and solid relations between the United Arab Emirates and various countries of the world, in the field of combating organized crime, noting the keenness of Dubai Customs to support all security authorities in combating organized crime and drug smuggling around the world, aiming to create a society free of narcotic toxins, stressing that Dubai Customs will not stop there, but intelligence work is currently underway to find information related to other smuggling operations that will be announced later.
Bin Sulayem extends his appreciation to the efforts of Dubai Customs teamwork to thwart smuggling operations, in addition to the continuous intensive security follow-up, which was reflected in applying precise and specialized measures in the field of drug control inside and outside the country.
Ahmed Mahboob Musabih, CEO of Ports, Customs and Free Zone Corporation, Director General of Dubai Customs, stressed that Dubai Customs was the main success factor; from tracking and analysing shipments through the intelligence information obtained, passing through the monitoring of these shipments and passing the information to the Australian authorities immediately, untill achieving the largest drug seizure in Australia since 2019, which was hidden inside marble slabs shipped from a neighbor country, which has a value of more than Dhs 4 Billion and 40 Million.
Mahboob stressed the continuous efforts of Dubai Customs to support legitimate trade and protect society, which was and still is a forerunner within the customs administrations, stressing the readiness of Dubai Customs employees to combat all customs and security risks at the local and global levels in order to reduce smuggling operations and decrease the harm for countries and societies through trafficking in prohibited and narcotic substances.
Mohammed Al Suwaidi, Intelligence Department Director at Dubai Customs, indicated that the Australian authorities had earlier been able to arrest a gang formation after finding 748 kg of "methamphetamine" in August of this year, hidden in 24 containers that arrived at a berth at Port Botany, while another 1,060 kg of “methamphetamine” were found in 19 containers that arrived at the same port. In this context, this joint operation is not the only one of its kind this year, as there are other operations that resulted in the seizure of quantities of “methamphetamine” in air shipments that were scheduled to pass through to Dubai from one of the largest organised cross-border crime gangs, which are involved in trafficking crimes with narcotic substances, with the aim of carrying out smuggling operations between South America and Australia.
Colin Drysdale, the Regional Director Middle East & Africa at the Australian Consulate General in Dubai, praised the close cooperation with Dubai Customs, expressing his appreciation to the United Arab Emirates and Dubai Customs for their keenness and tireless work in the face of smuggling operations. He also extended his sincere thanks to the Customs employees Dubai for their efforts, which contributed to the success of thwarting an operation valued at Dhs 4 billion, which was the result of coordination and cooperation between Dubai Customs and the Australian Border Forces.