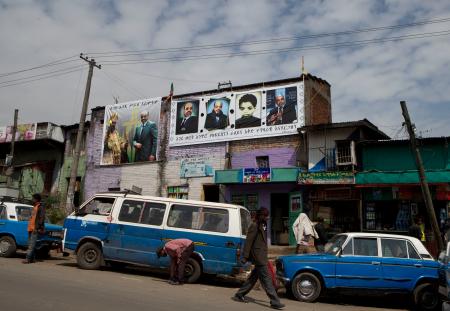 Ethiopia’s first e-hailing taxi service is scaling beyond the streets of Addis Ababa.

ZayRide, which launched in July 2016, is expanding to the Liberian capital, Monrovia. In collaboration with the Liberian web solutions firm Hak Technologies, the Ethiopian on-demand taxi service will introduce 200 cars by August this year, says founder Habtamu Tadesse.

The expansion is a noteworthy move for ZayRide, which was the first to introduce Uber-style ridesharing services in Ethiopia. While ZayRide wasn’t the first taxi-hailing service in the Horn of Africa nation—that credit goes to RIDE—it was the first to launch bookings via an app instead of text messages or calls. Alongside ZayRide and RIDE, there’s also ETTA: over the last few years, the three companies have all stepped in to offer smart transportation options and modernize the city’s old and rusty blue and white cabs.

E-hailing services like Uber and its rival Bolt (formerly Taxify) are yet to tap into Ethiopia even as they have introduced low-cost to premium products in smaller African nations including Uganda, Mauritius, and Ghana. The over 100-million people nation remains Africa’s largest untapped market, mainly because the government has for decades instituted a centralized economic model and restricted private sector operations to a few lines of activities.

Even with a fast-growing economy, the landlocked nation has remained poor and faces foreign currency shortages. Investors and global tech giants have also sidestepped Addis Ababa even though it’s home to the African Union and United Nations Economic Commission for Africa headquarters, boasts a new urban metro, and is undergoing massive construction of skyscrapers and roads undertaken by Chinese companies.

Habtamu decided to establish ZayRide after facing frustrations of not being able to conveniently hail a taxi on demand but also incessantly having to negotiate prices with drivers. Yet launching the company took six months, with regulators unable to discern if they should be registered as a transport or software company.

ZayRide also had to design its platform to work with the slower internet speeds encountered by users, mainly by compressing the application size. They also created a call center so that customers could call in case they didn’t “understand” the technology or during internet shutdowns

“We had to bring local solutions to local problems,” Habtamu says.

In addition to delivery services, the company aims to add an on-demand ambulance service. Its parent firm ZayTech develops websites and mobile apps for firms in Asia and the United States. And given the costs and logistics involved with paying cash for rides, ZayRide is now launching its own mobile point of sale dubbed ArifPay.

The push into Liberia comes after ZayRide secured funding from both local and international investors following previous crowdfunding.

For Habtamu, choosing Liberia is part of a strategy of expanding their footprint into markets where Uber and others giants are yet to launch. That tactic was solidified after Hak Technologies visited them in Addis Ababa and showed enthusiasm in striking a partnership to introduce their product in the West African state.

Venturing out of Ethiopia was also a way of defying their own instinct to stay in one market and make profits there. “We want to be the brand of Africa. We want to expand to more countries.”

The company is flexing its wings as Ethiopia liberalizes its market with authorities announcing plans to privatize state-owned enterprises in a bid to revitalize the economy and reduce unemployment and poverty rates.

Chief executive Habtamu says they are emboldened by these official moves and are looking to expand to Ethiopian cities including Gondar, Hawassa, and Mekelle. The also looking at West African states Guinea and Côte d’Ivoire and eyeing East African markets including Kenya and Hargeisa city in the self-declared region of Somaliland.

Much like in Addis Ababa, Habtamu says they hope to win by localizing their offerings and tailoring them to their customers’ needs. Each of these prospective markets “has its own culture, its own languages, its own way of doing business. So we have to bring it and mold it,” he notes. “Then people will use it.”