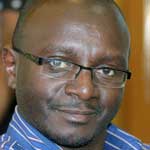 Private sector and State restate their determination to empower women.

Ruto returns to Coast for series of fundraisers

US group backs Kenya in border row with Somalia