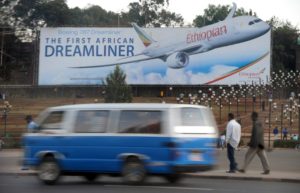 Zambia’s former transport minister recently warned against reviving the national airline 24 years after it was grounded, saying it’s “a well-known fact that all airlines in Africa… are struggling”.

Yet the relaunch of Zambia Airways has been made possible by a US$30 million cash injection by Ethiopian Airlines, said to be the largest and most profitable airline on the continent. The airline’s willingness to finance Zambia Airways suggests that some African airlines are profitable and, it seems, aggressively expanding.

So who are the biggest players in the African airline game, and are any of them making money?

There are various ways to stack up airlines by size, transport economist Dr Joachim Vermooten, a senior researcher at the University of Johannesburg’s transport and supply chain management department, told Africa Check. He said that while revenue, assets, profit, and market capitalisation may interest financial analysts, the aviation industry rarely uses these to measure an airline’s size.

Some of the most frequently used measurements, according to Vermooten, are the number of aircraft, available seat kilometres, number of destinations, number of employees and passengers carried.

Some of these factors will overlap. An airline with a large fleet of aircraft that fly to numerous destinations will also employ a large number of people and carry many passengers.

The size of an airline also depends on whether we are looking at the airline group, or just the airline itself. For example, the South African Airways Group consists of SAA airline, SAA Cargo, SAA Voyager, SAA Technical, South African Travel Centre, Mango, and Air Chefs.

While SAA airline is by far the largest company in the group, contributing 81.84% to its 2017 revenue, the other parts of the business are still significant.

So who is the biggest?

The International Air Transport Association told Africa Check that Ethiopian Airlines was the largest airline on the continent when measured by revenue passenger kilometres, followed by South African Airways and EgyptAir. This was based on the latest World Air Transport Statistics, an annual compilation of key aviation statistics.

Revenue passenger kilometres (RPK) is a measure of passengers carried by an airline. It is calculated by multiplying the number of paying passengers by the distance travelled.

In fact, by most measures Ethiopian Airlines is the largest airline on the continent. It has a larger fleet, hires more staff and is the only large African airline to generate a significant profit, ETB6.1 billion in 2015/16 (at the time about US$278 million).

The other large African airlines to make some profit are EgyptAir and Royal Air Maroc, according to the latest financial results made public. The EgyptAir group reported a profit of EGP71 million in 2016/17 (then about $4 million), though the airline itself suffered losses of EGP5.6 billion (about US$315 million).

Royal Air Maroc also showed profits in their latest results, suggesting earnings of MAD231 million in 2015/16 (about US$24 million at the time).

ANALYSIS: For all the billions, SA Airways bailout money not enough to buy Emirates

FACTSHEET: Africa’s single air market – getting from A to B without going via Z

Does Africa only have 3 facilities to repair aircraft?

© Copyright Africa Check 2019. Read our republishing guidelines. You may reproduce this piece or content from it for the purpose of reporting and/or discussing news and current events. This is subject to: Crediting Africa Check in the byline, keeping all hyperlinks to the sources used and adding this sentence at the end of your publication: “This report was written by Africa Check, a non-partisan fact-checking organisation. View the original piece on their website", with a link back to this page.