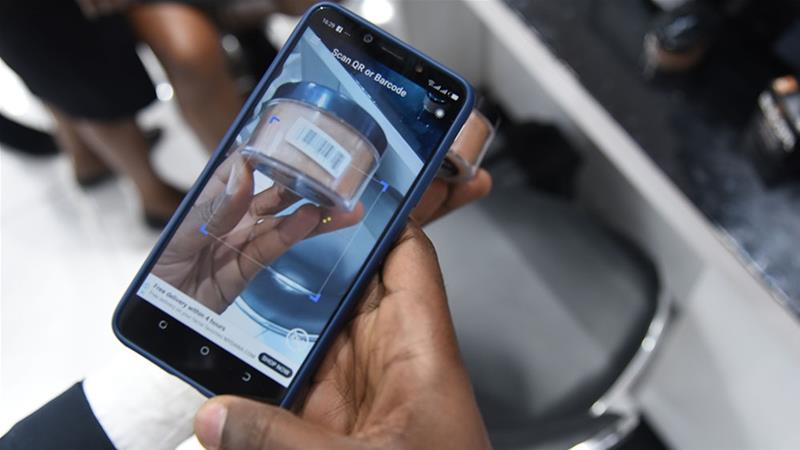 But since launching her line in 2013, Tuikong has found that her biggest competition is not premium international brands, but fakes posing as them.

"My competition as a Kenyan manufacturer is not the Estee Lauder line," Tuikong told Al Jazeera. "Rather, [it is] Dubois and River Road[s]."

Dubois and River Roads are the hub for cheap knockoff cosmetics in Kenya. A simple price comparrison of lipsticks illustrates how those fakes undercut homegrown brands.

By comparison, a brand-named imposter on Dubois Road can sell for as little as 150 Kenyan shillings ($1.50).

"Why is the government not doing anything about this?" she questioned. "It needs to interrogate why these products are this cheap, and what health and safety risks they pose to citizens."

Trade in these items is growing year by year. Almost all of them are coming in from China.

Identifying fakes is not always straightforward. Counterfeiters have found ways to thwart measures like barcodes on packaging designed to help comsumers differentiate between what is genuine and what is counterfeit.

In an effort to determine the potential health hazard to consumers, Kenya's Anti-Counterfeit Agency (ACA) recently sent a batch of counterfeit cosmetics for testing to the Kenya Bureau of Standards (KEBS).

In the meantime, stemming the tide of fake cosmetics flooding into the country is proving increasingly challenging for officials.

The proliferation of fake cosmetics in Kenya is woven into an explosion of a whole range of counterfeit products from China. These include electronics, pharmaceuticals, luxury goods, fashion apparel, footwear, auto parts, food, cigarettes and alcoholic beverages, according to ACA's Adera.

"Trade in these items is growing year by year," Adera said. "Almost all of them are coming in from China."

The ACA is charged with combating counterfeiting by inspecting and clearing goods that flow into Kenya from abroad and with carrying out market surveillance to intercept illicit products that have found their way into the country.

But like many enforcement agencies, the ACA faces an overwhelming task.

"The agency is understaffed, with only 60 inspectors spread across the country's ports and the city [of Nairobi]," said Adera.

Some 4,500 ten-foot shipping containers of imported goods come through official Kenyan ports every day, according to the KRA. Imports also arrive overland from neighbouring countries. And recent trade deals could further add to the volume of imports.

Adera described how a lack of resources has given rise to a vicious cycle. The more containers that arrive at ports, the more likely they are to be released uninspected. And when a container is seized, word of the enforcement action reaches opportunistic traders, who then orchestrate a workaround.

"Unscrupulous traders have adopted the trend of clearing their dirty cargo at night when our officers are not present to conduct the container-freight station searches," Adera explained.

Kenyan authorities have ramped up efforts to intercept counterfeit and contraband goods. But last year, the crackdown sparked protests by small traders who claimed their businesses suffered while waiting for goods to clear customs.

The small traders also complained of harassment by KEBS and ACA officials who raid shops searching for illegal goods.

Last year, more than 30 top KRA and KEBS officials were arrested as part of an ongoing probe into imports of contraband and contaminated goods into the country.

But new measures may help in the battle against counterfeit cosmetics.

From July 1, 2019, onward, importers will be required to record all intellectual property with ACA for any items they bring into the country.

"If you bring in MAC [cosmetics], then you need to satisfy to us that you're either the brand owner or you're an authorized distributor," said Adera.

"There have been a few raids on shops since March 15," said Adera, "and we're working to cut off [the] supply."

While that may be welcomed by those who lose business to counterfeit cosmetics – or who are unwittingly duped into buying fakes – the increased diligence is not going down well with some shop owners on Dubois and River Roads.

Owners have organized and joined an informal group, the Nairobi Importers and Small Traders Association, to push back against mounting government pressure.

Al Jazeera caught up with the group's representative, Nyokabi Gachari, and asked whether the traders she represents are aware of the potential harm the products they sell could cause to consumers.

"We do not know what the ACA means when it says we're selling counterfeits," Gachari told Al Jazeera. "They've not done civic education telling us what counterfeits, substandards [and] contrabands are. So as far as we're concerned, we're not doing any wrong."

Herself a trader, Gachari insists she's performing a public service. "We're catering to an underserved market of Kenyans who want to look beautiful but don't have the spending power to walk into an international shop and pay for a tube of product," she said.

But such arguments ring hollow for Nelly Tuikong, who sees counterfeit cosmetics, no matter how cheaply priced, as a bad deal for consumers.

"The products look quite fine on the outside, but once you open that box you can clearly tell that whatever is in the bottles is quite substandard stuff," she told Al Jazeera, "Some are lumpy, and the colours and consistency are worlds apart."

This article is the second in a two-part series examining counterfeit cosmetics in Kenya. Click here to read part I.