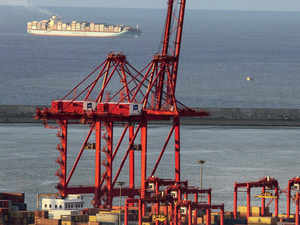 NEW DELHI: India has decided to join hands with Japan and Sri Lanka to expand the port in Colombo as part of efforts to balance Chinese inroads into the neighbourhood. This marks one of the government’s first foreign policy moves following its reelection.
Sri Lankan President Maithripala Sirisena’s proposed trip to India for Narendra Modi’s inauguration this week is seen as a boost in this regard with the three countries planning to sign a memorandum of understanding (MoU) in the near future, ET has learnt.
The trilateral project’s goals are to increase Colombo port’s container volume and increase transportation in and around South Asia, according to persons aware of the matter. The deal comes as China has been using its Belt and Road Initiative (BRI) projects to increase its influence in the region. India and Japan are also eyeing joint development of the Trincomalee port in eastern Sri Lanka. India along with Japan aspires to pursue a Free and Open Pacific Ocean and Indian Ocean strategy.
Colombo port, through which 90% of Sri Lanka’s seaborne goods pass, connects Europe, the Middle East, Africa and Asia. It had traffic of 6.21 million twenty-foot equivalent units in 2017, making it Southwest Asia’s busiest port. The port desires to benefit and attain full capacity with a boom in regional economies.
The three countries will develop the east container terminal, located at the southern part of Colombo port, which has been newly expanded, indicated one of the persons mentioned above. The trilateral projects also involve developing a facility that will allow large container ships, the person noted.
Officials from the three countries are currently in talks and expected to agree on the scale and form of the project over the next few months. Private sector participation will also be sought and Japanese Official Development Assistance will finance a portion of the project.
Colombo has sought to increase the presence of India and Japan in the island nation since 2015, after concerns about increased Chinese investment that was driving the country into indebtedness. Sri Lanka had to hand over its southern port of Hambantota to China on a 99-year lease after it fell into a debt trap.
A Japanese government source told Nikkei: “If the development of the Port of Colombo takes time, cargo might be transferred to Hambantota.”
Some of Japan’s maritime routes run through the Indian Ocean region where India is the primary power, so improved capacity at Sri Lankan ports will improve the security of tankers and commercial ships.
Read more onChinajapansri lankaBRIIndiaIndian OceanColombo port

China is building an armada

Hair too, Pakistan roots for China