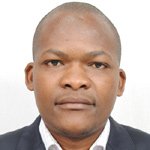 Three in court for plan to free two Iranians from jail

The men allegedly were willing to spend $150,000 to get the terror suspects out.

The DPP wants major reforms in the public sector in order to win the fight.