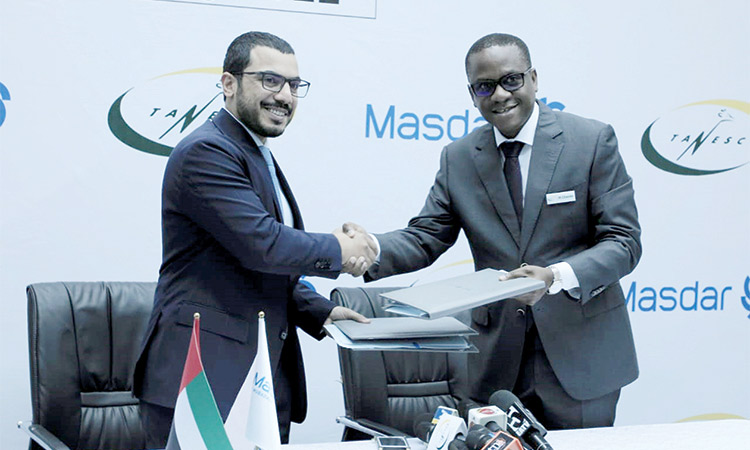 Top officials after signing the agreement in Dar Es Salam.

Masdar announced that it has signed an agreement with Tanzania Electric Supply Company Ltd. (TANESCO) related to the development of renewable energy projects with a total capacity of up to 2 gigawatts (GW).
In the presence of January Makamba, Minister for Energy for Tanzania, the Joint Development Agreement (JDA) was signed by Abdulla Zayed, Head of Business Development & Investment at Masdar, and Maharage Chande, Managing Director of TANESCO, on the sidelines of the Tanzania Energy Congress. The JDA envisages the establishment of a co-owned joint venture (JV) company by the two organisations to progress the project development.
Commenting on the agreement, Maharage Chande said, “The agreement we are signing today will bring about a big revolution in the development of renewable energy in the country. Through the first phase of the collaboration, we expect to generate approximately 600 megawatts, and we will continue with other projects until we reach 2,000 megawatts.”
For his part, Abdulla Zayed said, “Masdar and TANESCO are working together to support Tanzania’s sustainable development and to provide a secure, clean source of energy for the people of Tanzania. The signing of this agreement demonstrates Masdar’s commitment to the Tanzanian market and to the nation’s energy transition, supporting the target to reach 5,000 MW capacity by 2025. We look forward to working with TANESCO to develop this ambitious programme and to provide a clean pathway for growth for Tanzania.”
Through the JV, the two companies are initially targeting the development of renewable energy projects with a capacity of about 600 megawatts (MW) starting with solar photovoltaic (PV) and onshore wind. The JV will further explore the development of projects with a total capacity of at least 2,000 megawatts.
TANESCO, the sole provider of electricity in Tanzania, is looking to add more renewable energy sources to the national grid to meet the country’s growing demand for power and increase energy access. The Tanzanian government is targeting an electrification rate for the entire country of 75 percent by 2035.
Masdar announced recently that it has achieved financial close for its 230-megawatt (MW) Garadagh Solar Photovoltaic (PV) Plant in Azerbaijan – the nation’s first foreign investment-based independent solar power project, and Masdar’s first project in the country.
The project is co-financed by Abu Dhabi Fund for Development, the Asian Development Bank, the European Bank for Reconstruction and Development and Japan International Cooperation Agency.
Azerbaijan is targeting to increase the share of renewable sources in its installed power capacity to at least 30 percent by 2030, as the country looks to diversify its economy and reduce greenhouse gas emissions.
Masdar has also signed agreements with Azerbaijan’s Ministry of Energy to develop clean energy projects with a combined capacity of 4 gigawatts (GW) in the first phase, with the right to develop an additional 6 GW in the second phase. Masdar signed two implementation agreements in June – one relating to the development of 1 GW capacity of onshore wind projects and 1 GW of PV projects, the second covering integrated offshore wind and green hydrogen projects with a capacity of 2 GW.
Masdar is one of the fastest-growing renewable energy companies in the world and is targeting reaching a capacity of at least 100 GW by 2030, having grown its portfolio 40 percent last year alone. In December, the UAE government announced Abu Dhabi energy champions TAQA, ADNOC, and Mubadala would join forces as shareholders in Masdar, creating a truly global clean energy powerhouse that will be a major force in renewables and green hydrogen.
Separately, AD Ports Group, the leading facilitator of global trade, logistics, and industry, has signed a Memorandum of Understanding (MoU) with Adani Ports and SEZ Ltd, India’s largest integrated ports and logistics company, for strategic joint investments in end-to-end logistics infrastructure and solutions, which include rail, maritime services, port operations, digital services, an industrial zone and the establishment of maritime academies in Tanzania.
The two companies signed the key agreement setting in motion a series of potential country-level investments to grow, improve, and promote an end-to-end maritime and logistics ecosystem which will make Tanzania a hub for the African region.
Capt. Mohamed Juma Al Shamisi, Managing Director and Group CEO, AD Ports Group, said: “This MoU with Adani Ports and SEZ Ltd is significant in its impact on both Tanzania’s ability to transform itself into an African trading hub, as well as our ability to further develop our global capabilities and connections that will bring goods to market faster and more efficiently.” “Our strategic investment in Tanzania in infrastructure and solutions will enable international companies to enter African markets.”