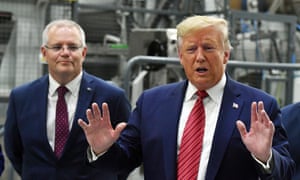 Main image: The skills retraining package is contingent on states signing up to an overhaul of the sector. Photograph: April Fonti/AAP

Good morning, this is Richard Parkin bringing you the main stories and must-reads on Thursday 16 July.

The federal government is offering a $2bn skills retraining program for Australians who have lost jobs due to Covid-19, on the condition that states sign up for an overhaul of the vocational education and training sector. The scheme will offer 340,700 training places available from September under the new “jobtrainer” banner. Company directors have also called on the Morrison government to extend regulatory relief for businesses, saying the crisis is “far from over”. Meanwhile, the University of NSW has said it will cut almost 500 jobs due to a funding shortfall from the drop-off of international students. Yesterday Victoria recorded 238 new cases, while Sydney’s Crossroads hotel cluster has expanded to affect 34 people. There has been a lot of speculation about whether “stage four” restrictions are coming to Victoria. Melissa Davey explains what that might look like.

Some 160,000 Catalans are back in lockdown as Spain records its worst 24-hour new infections tally since May,with the US recording its worst to-date increase, adding 67,000 cases. The popular tourist spot Magaluf has closed its party strip for two months after footage of drunken British and German tourists flouting social distancing emerged. In Colombia drug cartels and rebel groups have imposed their own lockdowns, killing those who fail to comply. Meanwhile, a Guardian special feature revisits how Italy’s initial call for help from Europe in February fell on deaf ears.

Concerns about platforms such as TikTok’s potential abuse of personal information data should not just be limited to companies linked to China,investigations have suggested, with a US media analysis of Facebook and apps used by Apple showing similar levels of data retention. And with calls increasing in Australia for social media’s newest star to be banned, Josh Taylor examines the digital privacy landscape: “The only reason governments or politicians have raised concerns about what apps or websites collect on their users is when it has political or national security implications, such as TikTok or Cambridge Analytica.”

Just one in six Australians polled correctly identified the US as Australia’s largest source of foreign investment, such has been the focus on China’s rapidly expanding economic reach, a University of Sydney study has found.

The use of e-cigarettes among young Australians has expanded fourfold in six years,according to a national health survey. And while smoking numbers have reduced in the past two decades the increased use of e-cigarettes has been labelled “very concerning”.

A company proposing a new coal-fired power station in Queensland has been accused of failing to consult Birriah elders before marketing itself as a “traditional owner company”, community locals have said. Shine Energy has been promised $3.3m of federal money to conduct a feasibility study into a new site.

Ethiopia has raised tensions with Egypt after allowing a controversial dam built across the Nile to fill with water. The Grand Renaissance dam is key to the east African nation’s plans to become a major continent-wide power exporter but Egypt is adamant that more than 100 million people downriver rely on the water.

Ruth Bader Ginsburg, the US supreme court’s oldest justice at 87, has been released from hospital after being treated for a possible infection, a court spokeswoman said. Ginsburg is back at home and “doing well” after a procedure to clean a bile duct stent that was inserted last August.

Emmanuel Macron has been accosted by protesters during his Bastille Day walk, with gilets jaunes activists confronting the French president with accusations of heavy-handed policing and economic inequality.

A stricken migrant boat was left drifting for 40 hours in the Mediterranean, despite an Italian coastguard vessel and a commercial cargo boat passing within a mile of its position.

A 15-year-old Mongolian boy has died of the bubonic plague, with 15 others placed into quarantine after the boy fell ill after eating a marmot.

It was the work email that Bianca Martin desperately didn’t want to receive: “As of close of business, all the stores nationwide are not going to be operating due to Covid-19 restrictions.” With thousands of Australians forced into Centrelink for the first time, Luke Henriques-Gomes speaks to some grappling with a dramatically new reality. “I’m not that optimistic that I’ll end up in a job in the next few months – maybe that’s just realistic.”

The latest weekly jobs data dashes any hopes that a recovery for the Australian economy is near, writes Greg Jericho: “While the immediate large fall in teenage employment was to be expected – given their weak attachment to their job – the lack of recovery of work for those in the 20s (and also those in their 30s) points to the deeper, ongoing concerns with the economy.”

The idea of anyone over 60 having expectations of physical intimacy – let alone a healthy sex life – is distasteful to some sections of the population. For Elizabeth Quinn, single after several decades of marriage and re-partnering, it’s a brave new world entering the bear pit of online dating. “Sex and intimacy are among the most important ways we can connect with another person. It can be life-affirming and life-giving, and I would be foolish not to hope to make that kind of connection again.”

What’s in 0.5%? Well, talk to some leading voices in the business community and the legislated increase in superannuation next July looms as a significant headache. On this episode of Full Story, Guardian Australia’s economics reporter Ben Butler breaks down the squabble over super.

Full Story is Guardian Australia’s daily news podcast. Subscribe for free on Apple Podcasts, Spotify or any other podcasting app.

A lot has happened in Australian football since Newcastle Jets downed Melbourne City at Hunter Stadium on 23 March,and after a four-month hiatus the denouement of the 2019-20 A-League season could yet be just a little lively, writes Jonathan Howcroft.

Liverpool are finally set to join Blackburn Rovers and Leicester City as first-time winners of the Premier League and, while fans won’t be able to join in the celebrations inside Anfield, there will be a special podium built on the Kop.

Private medical information belonging to players at St Kilda football club is missing after a bag belonging to the team doctor was stolen from a car, the Age reports. It could take many years before Sydney’s public transport systems recover, writes the Sydney Morning Herald, with the city’s inhabitants making 32m fewer trips in June compared with a year earlier. And the Tasmanian and New Zealand governments are thrashing out a plan for a travel bubble between the three southern islands, the Mercury has revealed.

And if you’ve read this far …

They call him Italy’s Robinson Crusoe. But after three decades living alone on an isolated Italian island since he stumbled across it in 1989, 81-year-old Mauro Morandi is facing eviction. And he’s not too happy about it: “I’m so used to living in the middle of nature,” he told the Guardian by phone. “What would I do back in Modena? Play cards and go to bars?”

If you would like to receive the Guardian Australia morning mail to your email inbox every weekday, sign up here.