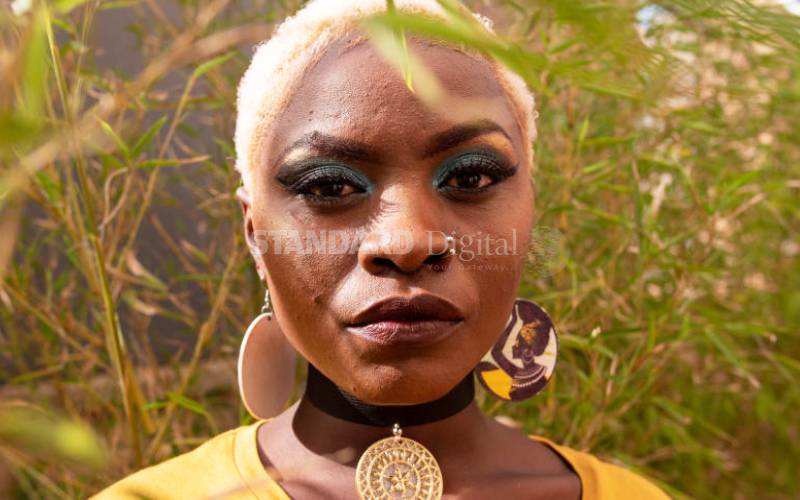 Grace cannot forgive herself for falling for a bait from an artiste’s WhatsApp group that would see her ensnared into sex slaves in India. She claims she has had to sleep with so many men to pay for the costs of taking her to Tughlakabad, Delhi City. On a bad day, she would have sex with nine men while all the payments were made directly to her “masters” – two Kenyan women operating in a much wider international human trafficking and prostitution web. Grace is reportedly among at least 1,000 Kenyan girls who fell victim to an underground but vibrant human trafficking scam to India where the desperate travel under the guise of seeking treatment for chronic illnesses such as cancer.

She recounted her horror to BBC Africa Eye and The Standard, citing how her “owners” would parade the girls to be picked up “like potatoes” in brothels. BBC Africa Eye airs her tragic account tonight under the title “Imported for my body” and will be replayed by our sister broadcast channel KTN. It is a tale of total deceit where hopeless young African girls, including nationalities from Uganda, Nigeria and Rwanda, are traded by masters who were previously sex slaves themselves. Buyers are mostly African men either working or studying in the Indian capital, seeking what they left back home in a place where inter-racial relations are rare.

For More of This and Other Stories, Grab Your Copy of the Standard Newspaper.

“I hated it so much that a man has to come and pick you up the way you go to the market and pick potatoes,” Grace says, fighting back tears. She survived the ordeal and is now back to school.

A session has a standard price of Sh1,400 (1,000 Indian Rupees), which is paid to the mistresses until the bondage of Sh390,000 (270,000) is recovered. She identified her oppressors as Goldie and Princess, who are middle-aged women that have scaled the prostitution heights to become mistresses called “madams”. Initially, she agreed to the proposal of repaying the 270,000. She thought it would be in Kenyan currency. A Rupee is worth nearly Sh1.50. The duo, she would learn from their interactions as family headed by a Kenyan “grandmother matriarch” named Anita, was shipped to India several years ago, engaged in sex with hundreds or thousands of men before paying off their travel costs to their bosses and becoming madams themselves. Five girls share one bedroom and the madams each have their own room. They live in a three-bedroom apartment.

After repaying the mistress’ inflated costs of getting her to the market, Grace, who was finally unshackled, agreed to an investigation that revealed the complex underground workings of the scam. It all started with a proposal in a video vixens WhatsApp group that there were vacancies to be filled in India. The work would include being a guide to tourists in the Indian capital – a proposition that in itself makes little sense considering that the targets are foreigners. But with the assurance that there would be training on customer service and understudying the city well before deployment, it might be justifiable. Grace jumped on the opportunity, where the corrupt Kenyan system helped her acquire a passport and fake medical assessment, which would justify her travel to India. It would later emerge that the travel bookings were made through a sham account in an attempt to scatter links to the mistresses. Upon arrival, she was received by her bosses, who immediately confiscated her passport, this greatly limiting her movements even within the neighbourhood.

On the fourth day after arrival in Delhi, Goldie asked her to join the other girls, where she would be introduced to an illegal club called kitchen. It is a place whose patrons are mostly Africans, with alcohol, cigarettes and other drugs. Customers can have their helping within the brothels or “takeaway” the girls for the time agreed on with the madams. Payment is made up front, then the men have their pound of flesh. Grace and the Goldie’s other girls would often be shooed to different kitchens throughout the day and late into the night, depending on demand. She recounts 15 kitchens she was sent to, and where Kenyan girls were slaving their bodies out. Just how does the prostitution and human trafficking ring prosper undeterred? Grace discovered in the ensuing investigation that a man called Eddie was at the heart of the sex trafficking network. The association would provide the perfect cover for the criminal empire he ran, traversing African countries’ borders but attracting little attention. The man is the mastermind that has deep dealings with crooks in various African countries who would find girls for export to flourish the sex slavery. His criminal enterprise has thrived for decades, considering that he helped Grace’s “grandmother”, who would in turn import Goldie and Princess, among others. The returns from the business are huge. Grace would later find out that her bosses spent a maximum of Sh80,000 to get her to the market, where she would toil her body to repay Sh400,000 – a 400 per cent profit. The man demanded of Grace, in the undercover investigation, more than Sh15,000 to get her own girl to Delhi. But there was a catch, she had to find two willing girls so one could be his, as a condition to arranging the logistics. After concluding the investigations, Grace returned home to her daughter, who she says was the reason she risked it all, leaving her hustles at home, which included dancing, singing and hosting karaoke events at various joints. “It feels good to be back,” she said in the interview.

Do not miss out on the latest news. Join the Standard Digital Telegram channel HERE.