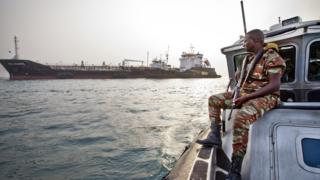 There were also incidents reported at the loading and anchorage facilities in the Nigerian port of Lagos.

Piracy in the form of hijacking and kidnapping for ransom payments was also common off the coasts of Benin, Ghana, Nigeria, Congo-Brazzaville and Cameroon.

One of the reasons West Africa is now the number one spot for piracy is because of the downward trends recorded elsewhere.