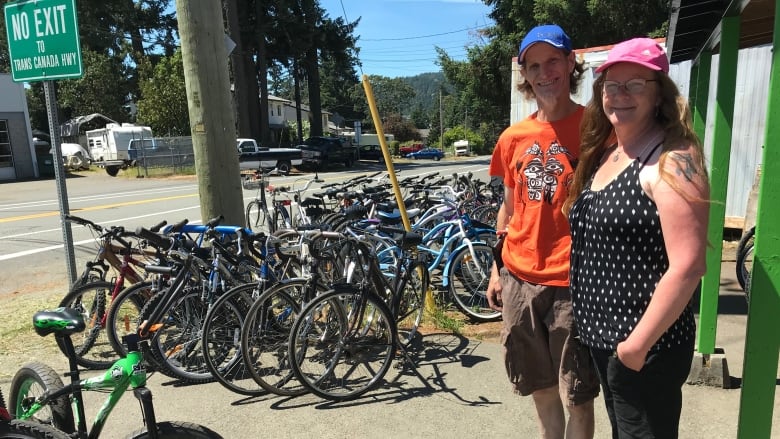 British ColumbiaVancouver Island couple refurbish damaged bikes to send to UgandaMore than 80 damaged bicycles from across Victoria, which had been slated to go the dump, will instead be fixed up and sent to Uganda.

More than 80 damaged bicycles from across Victoria, which had been slated for the dump, will instead be fixed up and sent to Uganda.

Rob 'Bones' Barron, who owns Re-Buy Cycle Shop and Jocelyn Samek, who works with a variety of youth groups in Uganda, decided to send the refurbished bikes to Africa after they noticed several damaged bikes from the bike-sharing company, U-Bicycle, around Victoria.

A local re-cycler mentioned he'd been hauling vandalized U-Bicycle's to the dump, and so it's been their mission to fix up them up and send as many as they can to people who may need them.

"A bicycle over there will last three generations and then some," Barron said. "It's one of the most important things in their life," says Barron.

They've collected 80, mostly vandalized bikes so far and part of the refurbishing process is taking out unnecessary parts.

"We don't want to send bikes that have junk… so we're trying to make sure that the bikes are in good condition with the least amount of useless parts on it," says Barron.

He says the bikes have steel frames, and some have generators which can be used to power light.

"For us to be able to provide them with a source of light that they could be [using to] study for more than half an hour at night is just in itself pretty remarkable," he says.

The couple says that when they send a shipping container full of bikes, the container will then be used as a structure for after-school classes during the rainy season.

With files from On the Island