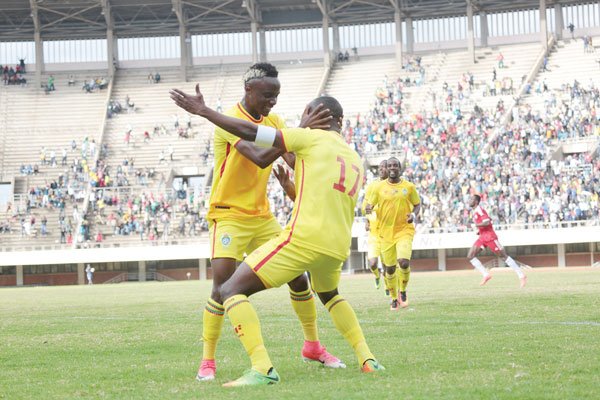 THE ZIMBABWE senior men’s football team are set to play the Super Eagles of Nigeria and two other high-profile teams in friendly matches as part of their Africa Cup of Nations (Afcon) finals preparations.

A source yesterday told NewsDaySport that the Nigeria Football Federation (NFF) had sounded their Zifa counterparts with an offer of the preparatory match to be played in Lagos next month.

It is claimed that Nigeria has also offered a three-week training camp for the Warriors in Lagos ahead of the Afcon finals set to kick off on June 21 in Egypt.

Zifa president Felton Kamambo is currently in Nigeria where he has been invited to attend the NFF-Aiteo Football awards ceremony held last night.

But crucially, it is understood that Kamambo’s main purpose of the visit to Lagos is to meet the NFF officials to iron out logistical issues over the training camp and the friendly matches.

“He is in Nigeria where he was invited for the NFF-Aiteo Football Awards,” Gwesela said.

The source said Kamambo also intended to use the awards event, in which more than 20 presidents of Fifa’s member associations from across the African continent were invited, to solicit friendly matches with some of Africa’s powerhouses.

Already, Ivory Coast is understood to be willing to play the Warriors in a friendly match.

“He is in Nigeria for two reasons. He was invited for the Aiteo awards, and also to sort out the logistics for a friendly match with Nigeria. The Nigeria Federation are also offering a three-week camp for the Warriors. During that time, the Warriors will play Nigeria and Ivory Coast who have also shown genuine interest. The president will also use the occasion to organise at least one more friendly match with one other team preferably from West or North Africa,” the source said.

“Zifa want to ensure that the Warriors get adequate preparations for the Afcon finals. The target that has been given to the technical team as you might be aware is to go to the quarter-finals and they have to be given all the necessary support.”

If the friendly matches materialise as expected, it will be good news for the Warriors team who will need such matches with the Cosafa tournament likely to be scrapped off this year after a late withdrawal by Zimbabwe from hosting the tournament.

Zimbabwe are set to be punished for reneging on their promise to host the tournament, and Cosafa have already summoned Zifa for a disciplinary hearing in South Africa on Thursday.

This year’s Cosafa tournament was set to start just weeks before the Afcon finals, offering five countries from the region, who have qualified for Egypt, a unique chance to warm up in a tournament setting.

It now looks like the Warriors, Angola, Madagascar, Namibia and South Africa will lose out unless another country takes up the offer.

Zimbabwe failed to adequately prepare for the previous edition, playing only one friendly match against Cameroon en-route to the finals in Gabon, where the Warriors failed to go beyond the group stages while the Indomitable Lions went on to win the title.

This year’s edition will be expanded from 16 to 24 teams and the Warriors will know their group opponents when the draw takes place in Egypt on Friday next week.

The 24 teams are seeded into four pots, based on the CAF national team rankings. They will be drawn into six groups of four teams. The hosts Egypt will be seeded in Group A.

The top two teams of each group, along with the best four third-placed teams, advance to the round of 16.