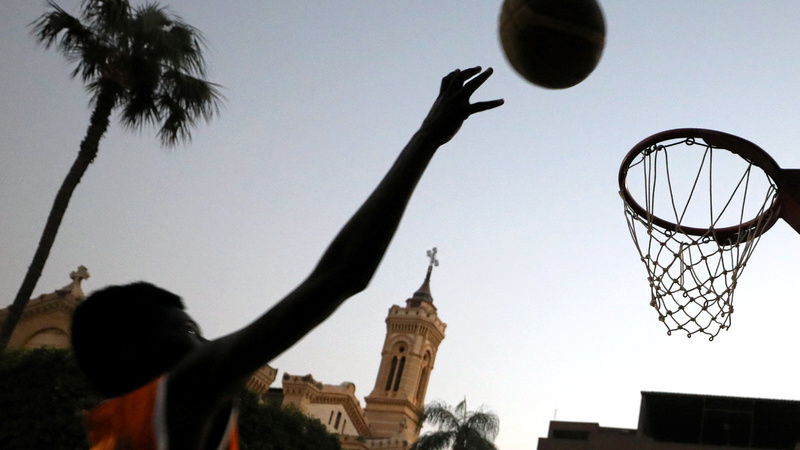 Michael Jordan doesn’t just turn up at a lunch, unless there is something in it for Michael Jordan. He will be there when Jordan is being celebrated or his brand is releasing a new clothing line or shoe.

Otherwise, Michael Jordan is busy when you call. So it was a big deal when the greatest basketball player of all time and one of mankind’s most impressive athletes turned up at a lunch function at the Marriott Hotel in downtown Charlotte, North Carolina, on 15 February during the American National Basketball Association’s All-Star Weekend.

He wasn’t the guest of honour, but he was at the function and if he is in attendance, it garners attention.
The NBA’s announcement that it will be creating a new professional basketball league in Africa is worthy of attention, and getting Jordan to attend the launch illustrates just how serious the NBA is about the venture.

The NBA is already invested on the continent. It has organised Basketball Without Borders — a development camp — in various African countries over the past 16 years, opened an academy in Senegal last year and hosted an exhibition event, the NBA Africa Game, in South Africa three times in the past four years.

Lending its considerable support to a pan-African professional basketball league was the next logical step. But this isn’t a charitable exercise.

Major accounting firms have ranked the NBA among the top four wealthiest sport leagues in the world. Its support of a professional competition in Africa is very much a business move, from which the NBA will want to make money at some point.

At the launch, NBA commissioner Adam Silver gave various economic reasons why he wants the organisation to grow its footprint in Africa. Six of the 10 fastest-growing economies are in Africa and 438 companies generate more than a billion dollars in revenue, he said.

“Africa is a huge economic engine. One place we haven’t seen huge economic growth is the industry of sport, which is something we are particularly focused on.”

The big picture is clear. NBA Africa managing director Amadou Gallo Fall said the Basketball Africa League — as it’s currently being called — will piggyback on the African Basketball League, which the International Basketball Federation (Fiba), the sport’s global mother body, runs. There are 16 participants in that competition; the NBA wants 12 teams in its new tournament.

Now comes the work of ironing out the details between the NBA and Fiba, which supports the initiative, along with various national federations around the continent.

The NBA has a lot riding on the league. It has announced support for the tournament from US basketball team owners and major sponsors such as Nike, Pepsi and Disney (The Walt Disney Company owns 80% of sports broadcaster ESPN and basketball has been core to its programming since inception).

“Combined with our other programmes on the continent, we are committed to using basketball as an economic engine to create new opportunities in sport, media and technology across Africa,” said Silver.

Masai Ujiri, the president of Canada’s Toronto Raptors, agrees. “The ecosystem of sport and specifically basketball is incredible. We are going to have jobs being created from this.

As much as any player from this continent — including greats like Nigerian-American Hakeem Olajuwon, Congolese-American Dikembe Mutombo and lately Joel Embiid from Cameroon — Ujiri’s story exemplifies the kind of opportunities the league could create for Africans.

He went from being a kid in the northern Nigerian city of Zaria who first dreamed about playing football to becoming a professional basketball player in Europe, then became an unpaid scout for Florida’s Orlando Magic team before taking up his current position as one of the NBA’s top executives at a team that have been regular play-off participants for the past five seasons.

Citing Embiid and Giannis Antetokounmpo (whose parents were born in Nigeria) as examples, Ujiri said the depth of talent in Africa is enormous.

There are logistical challenges. There aren’t enough arenas to accommodate a tournament on the scale the NBA is envisaging, but Gallo Fall says they are being built. Hotels, and of course travel, will need to improve drastically. But Ujiri is confident it can be done, saying a pro league will help facilitate this.

Ujiri says that because of the sporting talent present in Africa, upscaling the logistics is inevitable. “The talent is one of the most difficult things to get. If you don’t have it, then it’s a different story. Then you’re just trying to make something out of nothing. But the talent is walking all over and I think that’s special.”

For now, the tournament, which is scheduled to start early next year, cannot be expected to compete with the NBA. But more than most private entities, governments or even celebrities, the NBA has always viewed Africa optimistically. It has created development initiatives over many years, improved those programmes, turned kids from those programmes into big-name professionals, brought its biggest stars to South Africa and played more than one exhibition game in the country.

The Basketball Africa League is a serious enterprise. It has the backing of presidents including Paul Kagame of Rwanda, Uhuru Kenyatta of Kenya and, notably, former US president Barack Obama, a huge basketball fan.

It also has the backing of Michael Jordan. He posed for a picture at the announcement of the competition, but didn’t say anything. He didn’t have to. His mere presence spoke volumes about what is to come. — New Frame

NationalAaisha Dadi Patel | 2019-03-05 19:01:00 Mampintsha out on R2000 bail, threatens to lay charges against Babes Wodumo After his arrest on Tuesday, Mampintsha has been released on bail and is threatening to lay charges against Bongekile Simelane, aka Babes Wodumo. NationalAaisha Dadi Patel | 2019-03-05 19:01:00